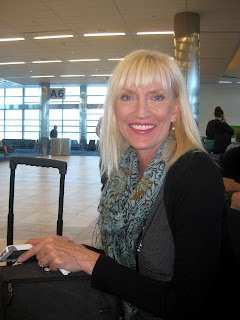 Those of you who see me all the time, know that today marks the beginning of a huge adventure.  I’m off to Europe to paint in Tuscany!  Traveling on my own…that’s a new twist on
travel for me.  I’ve been married to a
detail oriented guy for most of my life now, and though I’m capable of handling
details, my husband Paul is good at being “pilot in command”.  Letting him be in charge feels more relaxing and that’s part of the vacation experience for me.  This trip is different.  I’m going to have to stay sharp.  It’s a little scary, but it’s already been
fun.  Traveling on your own somehow makes
you accessible.  People seem
friendlier.  Maybe it’s something about the energy I send out when I’m by myself…maybe I’m more
open to interaction.  That’s food for
thought…
I got to the airport with 2 checked bags…one with art
materials and the other with belongings.
I probably brought too much.  I
have a rolling backpack and a camera bag that is doubling as my purse.  I think the $5 tip to the valet at the curb
was the best $5 I’ve ever spent.
Thanks to him I wasn’t charged for my backpack as a carry-on.  Spirit Airlines loves to charge for that
luggage!
I saw my friend Ann Berg at the TSA check-in for security
and gave her a smooch on the way to the check-point.  I asked her if it was against the law to kiss
the TSA agent, and we agreed that neither one of us cared! 😉 What a great
beginning to my morning!
Once at the gate, I relaxed and got a cup of
coffee.  As I got on the plane, I ran
into another friend, Pamela.  She was on
her way to a wedding in NYC and we made lunch plans for when I got back by
talking across the aisle as others were boarding.  That started another conversation with folks
in the seats next to me.  Normally I
don’t do a lot of visiting with fellow passengers, but like I mentioned
earlier…this trip something is different.
At LaGuardia (which always seems startlingly
decrepit…how can it be that the coolest city in the country has the worst
airport?)  I then had to get to JFK for
my flight to Dusseldorf.  I decided to take a
cab and relax rather than deal with the bus.
As luck would have it, I got into Bettique’s yellow cab.  (With a name like that, she doesn’t need a last name!) What a great ride!  She has been a yellow cab driver for over 30
years.
I told her that I had never
ridden with a female cabbie before, and she said that she was one of only a handful
of women who drive in the city.
Apparently women cab drivers are less than 1% of the drivers.  She said over 55% are now Pakistani.  Years ago, when women were being targeted and
killed, she said most women drivers quit.  She
had some great stories of driving the cab and in talking, we found out that we
both had been nurses in our past lives.
I commented that she must be tough to be a woman in her business.  She said she had to pay attention and be
smart, but she would describe herself as
“fearless”.
I thought that was an
interesting distinction.  There is a
difference between being tough, and being fearless.  Tough implies being closed and impenetrable.
Fearless implies openness and courage.  Before
I knew it, she had me at JFK.  I’m so
early for my flight that I can’t check in, so I have time to sit here and write
this note. 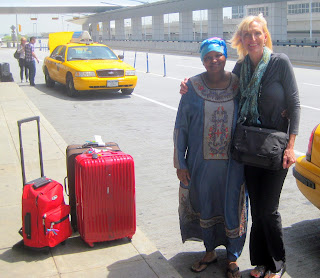 At my friend Janelle’s shower yesterday, I saw a bunch of friends I
love and admire.  At the party, many found out for the
first time that I was leaving for Tuscany today.  It’s a unique thing to be able to go on this
trip by myself, and hearing my friends’ reactions only reinforces that for
me. It’s really unusual to be going on this crazy and incredible trip by myself.  Do I need to be tough?  I don’t feel tough.  I’m a little anxious.  I’m scared about making connections and
meeting up with my group at the right time, in the right place, at a foreign
airport. What if I miss connections?
What if I can’t understand the language cues once I get there?  I don’t feel tough.  But after meeting Bettique, I’m
encouraged.  Like her…I don’t want to be
tough I just want to be fearless.
Rebecca Zdybel
Artist/ Art Instructor
Myrtle Beach, SC