Cave Paintings at Cougnac and Pechmerle

Sometimes the things you see on a vacation are a complete surprise. These caves were fantastically surprising!  The definition of great art for me, is a painting that intrigues me, with mystery or a sense of story that draws me in and captivates me. These caves and their paintings have all that and more… 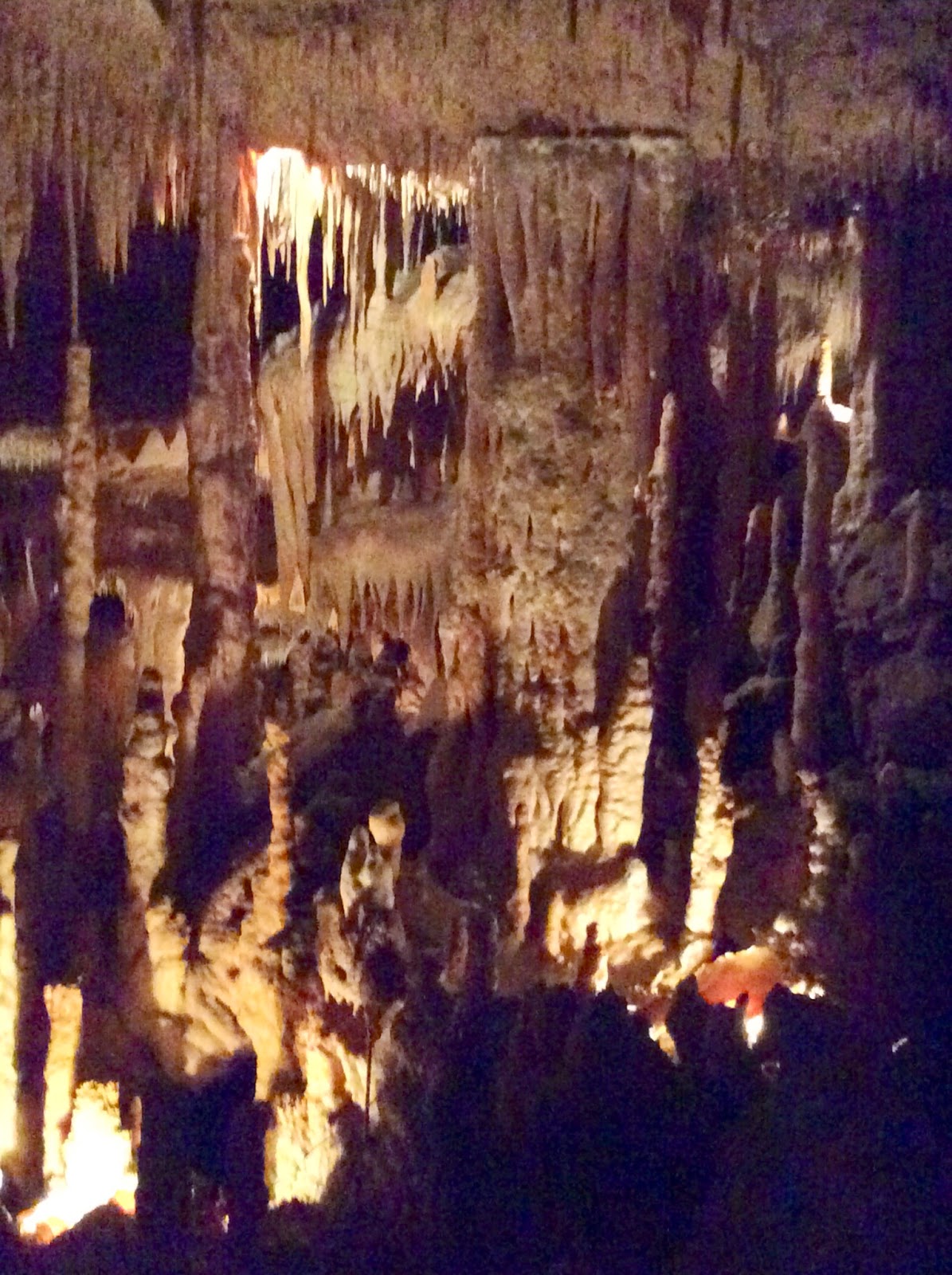 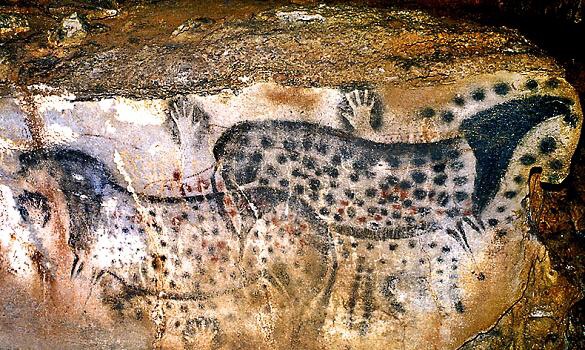 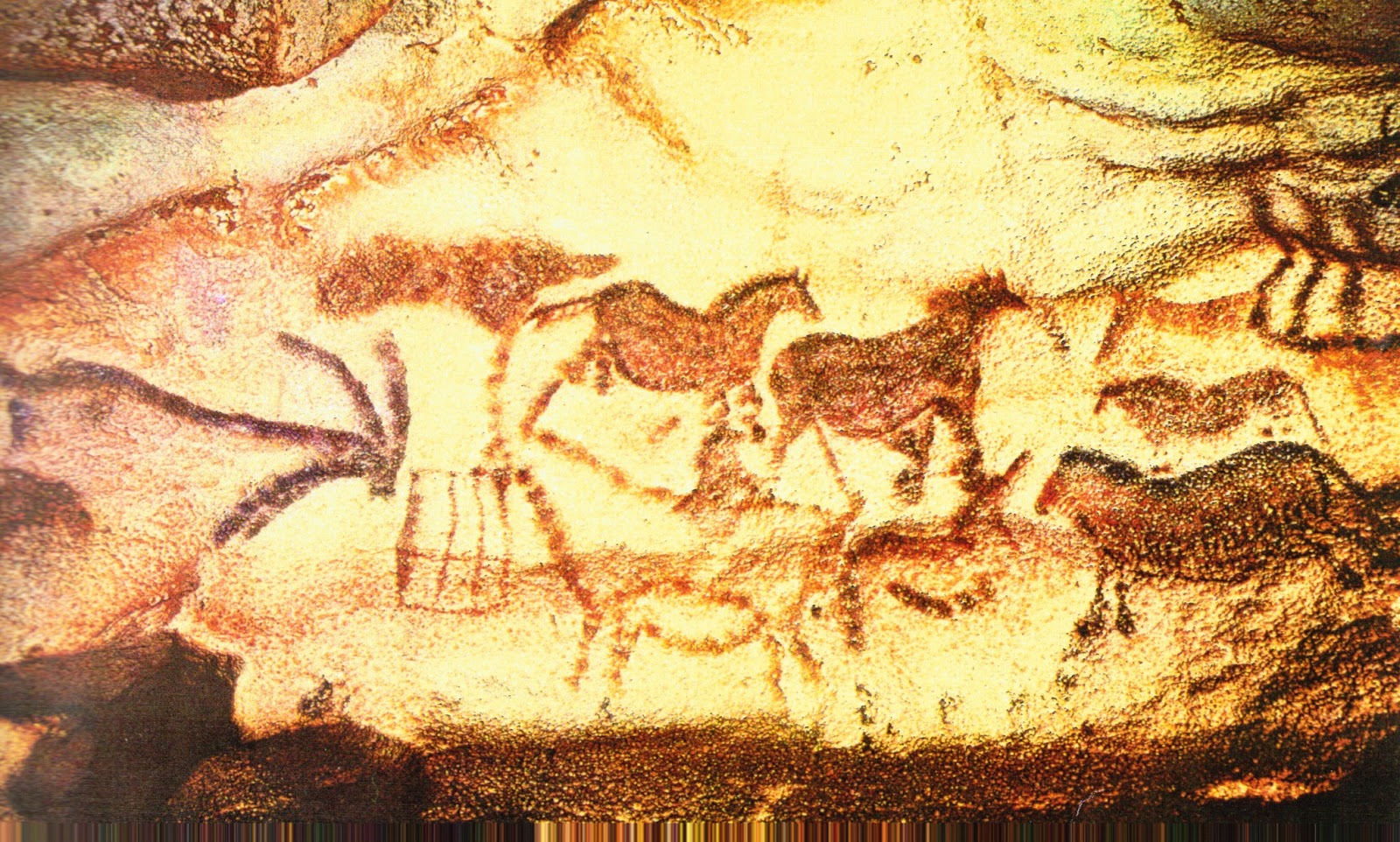 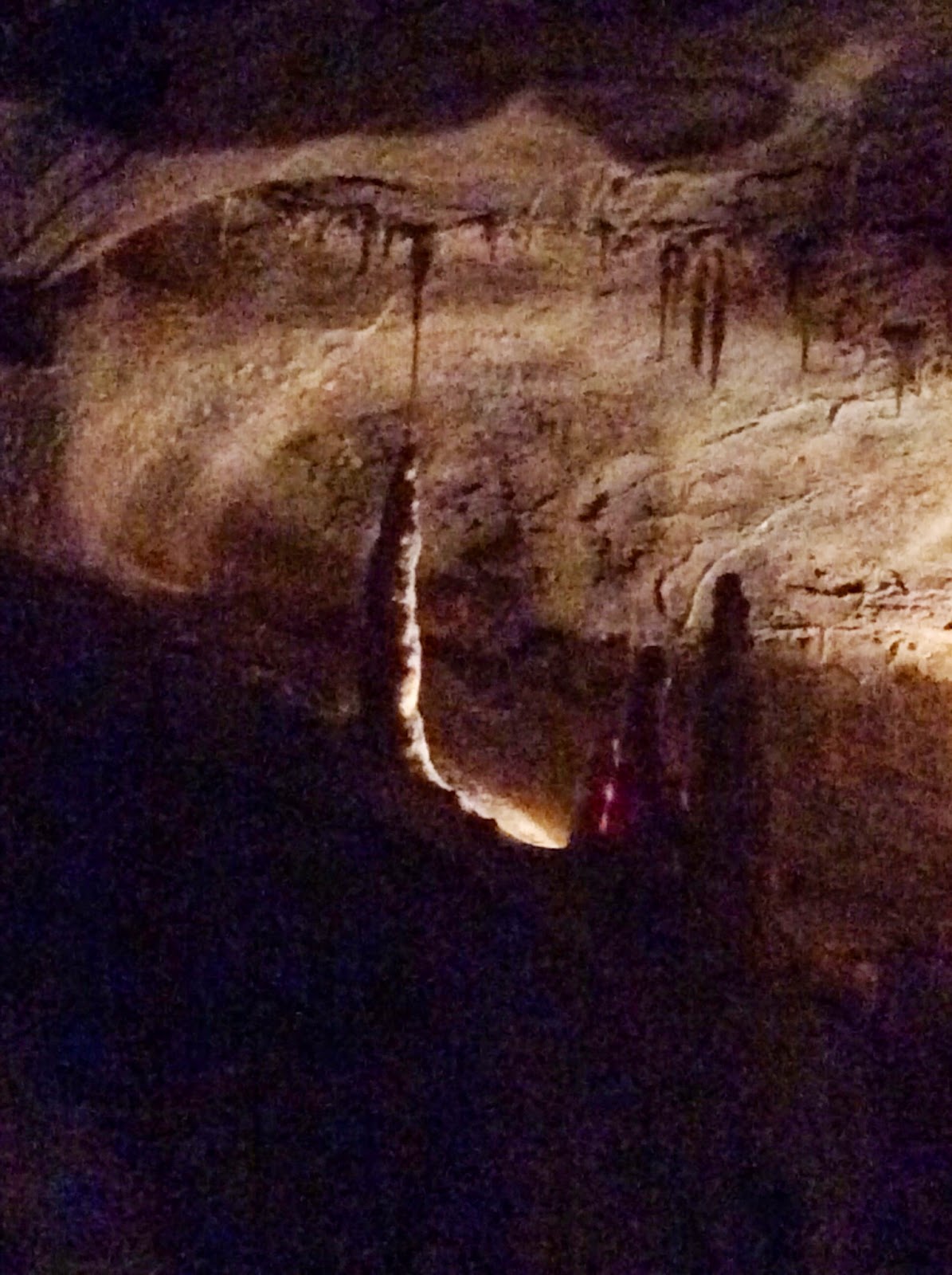 Talk about other-worldly!  The caves of France are incredible and a MUST SEE, as far as I’m concerned.  Cougnac caves are near Le Vieux Couvent in Frayssinet, which was our home base.  Pechmerle is also nearby. Once I experienced the Cougnac caves, I vowed to see as many others as possible.  Thankfully, a small group of us took another trip and made the effort to see Pechmerle while in France.  Thanks to Karlyn Holman for helping us to make that arrangement!  It was another moving glimpse into our connection with artists from our ancient past. 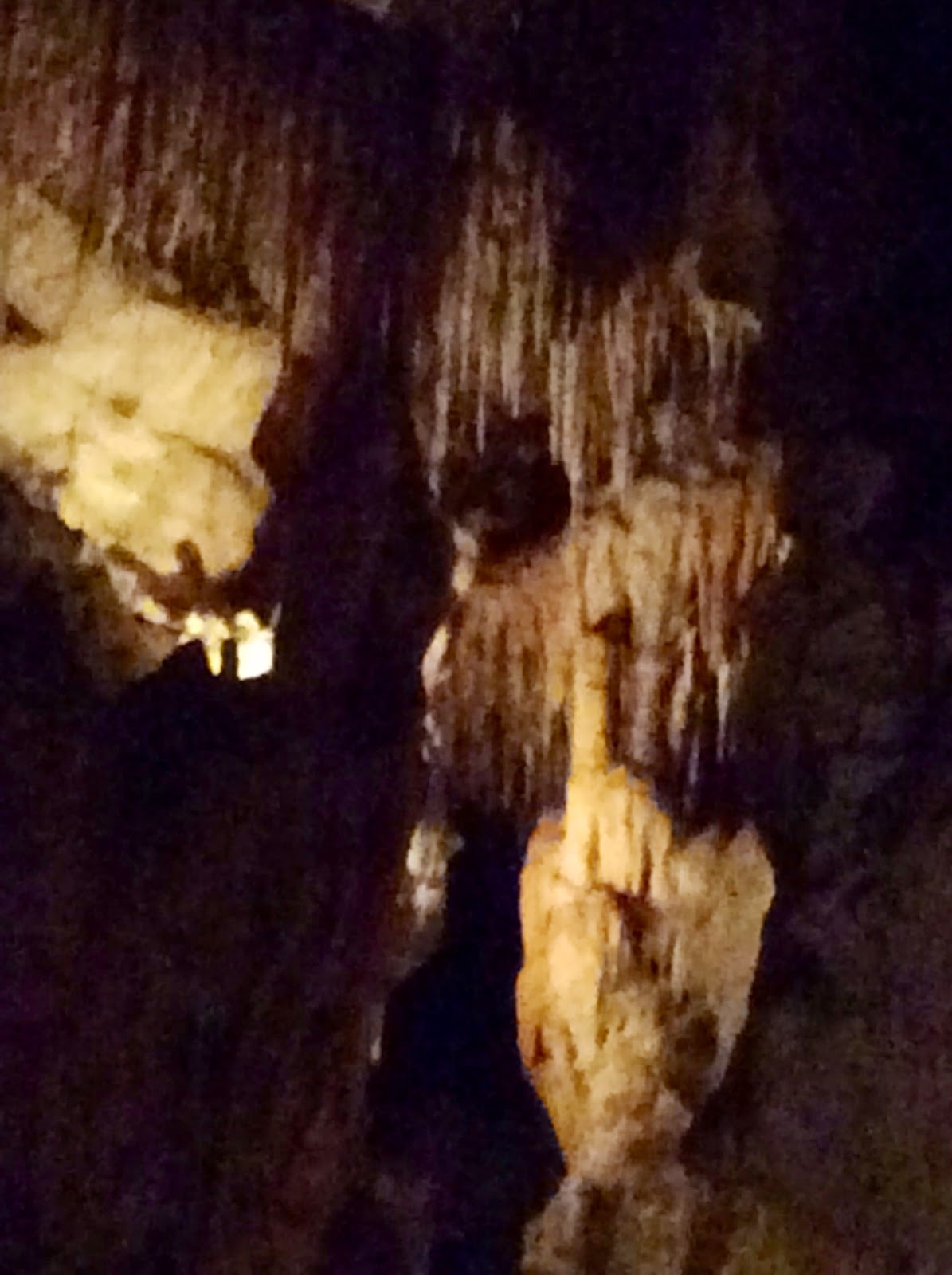 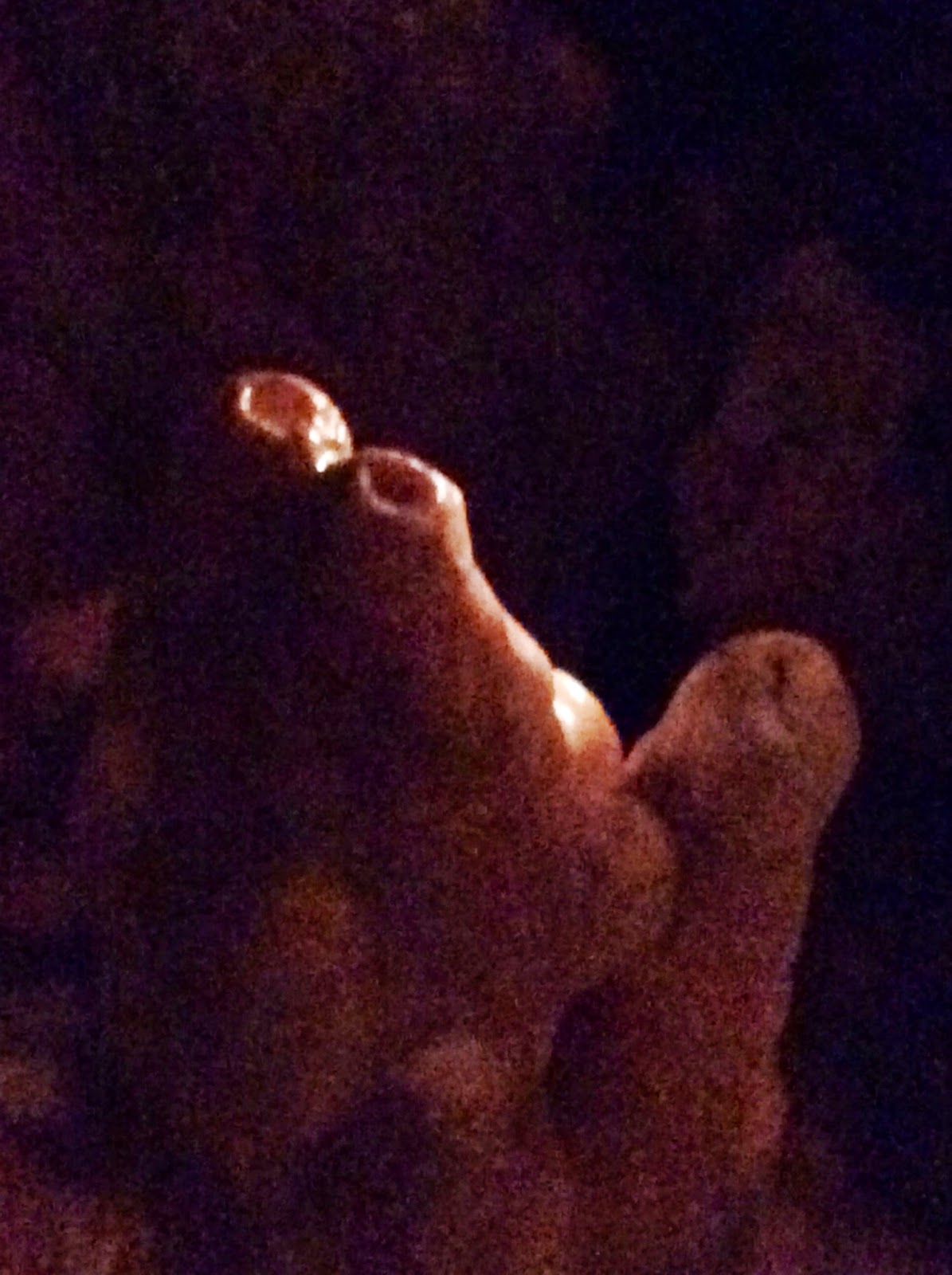 The idea of artists painting in caves is not news.  We’ve all heard about it, but experiencing it is another thing entirely!  I thought the drawings would be like frescoes or decorations which might be found just inside the door or cave entrance.  Well I couldn’t have been more wrong!  First of all, there’s no door.  Second of all, it was an incredible effort just to make your way to the place where the first artists created  their paintings. 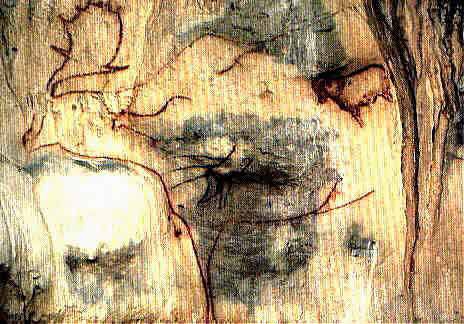 The artists who decorated the walls of ancient caves were painting with saliva and ground minerals approximately 25-30,000 years ago! Imagine that…it’s awe inspiring and difficult to even comprehend.  What that means is that art was an impulse and a form of expression present in our earliest ancestors.  Homo sapiens were vying for domination of the humanoid species, but Cromagnun man (and woman!) may have been among the first artists.  In fact, published research from 2013 indicates that the MAJORITY of cave painters were female! How about that?! We didn’t hear about the female artists during our tours of the caves, but my research confirms this factoid. Since handprints were often found as part of the imagery in the caves, researchers have done analysis and come to the conclusion that over 60% of the paintings were likely done by females.   GO GIRLS!  (look for this research described in publications dated October-2013 including Smithsonian magazine and elsewhere) 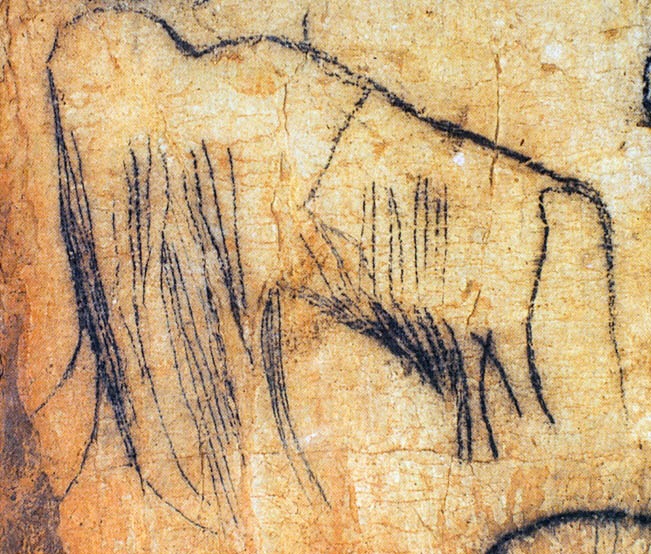 Some of the images are wild, and make you wonder if they might represent fantasy creatures.  Many are images of now extinct animals. You’ll find wooly Mammoths, and deer with huge “moose-like” horns, as well as spotted horses in these ancient paintings. 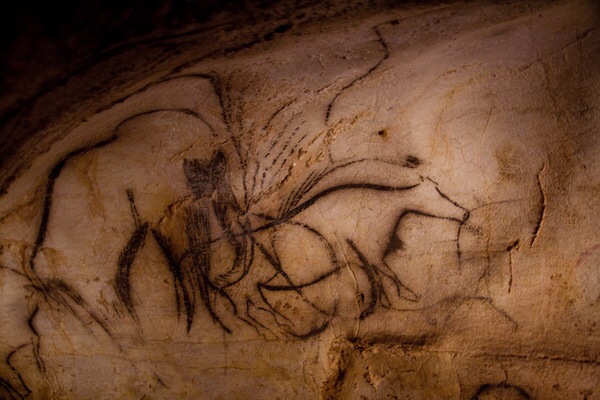 Scientists speculate that these leopard spotted horses may actually have been in existence during these paleolithic times!  Maybe early relatives of appaloosa or paint breeds? (my non-scientific speculation) 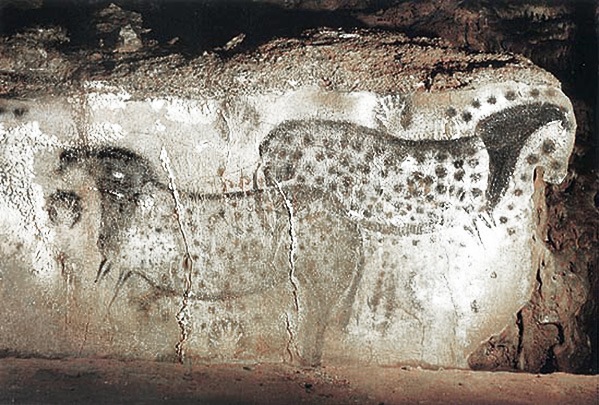 One of the artists may have even been an early relative of Kilroy (just kidding!).  Like the Kilroy graffiti which GI’s left behind at places they visited, there is an odd geometric/avian symbol found in a few different ancient cave sites in France.  Some of the sites are more than 30 Km apart from one another.  This means that one artist got around to various sites, or that various artists found meaning in  that same symbol.  That meaning has been lost to us over the thousands of years since it was made, but here it is below: 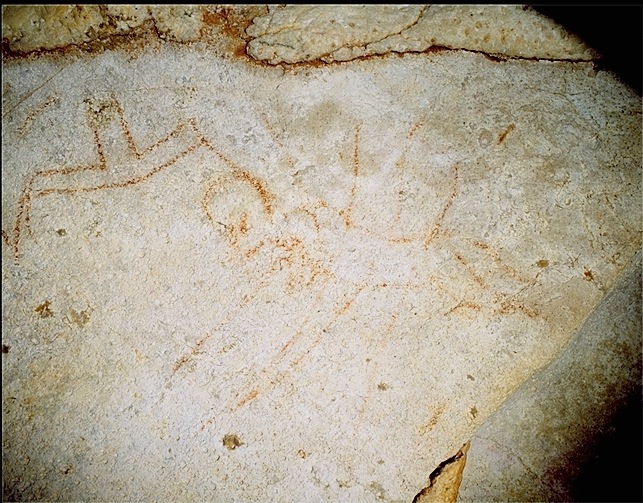 The art is obviously practiced, and was done without photos or real subjects for reference.  To create these images, we all agreed that the paintings we viewed were not the work of a novice.  The artist had obviously painted these images many times in order to be so certain with their lines.  Sometimes the contours of the rock would be used to advantage of the image. 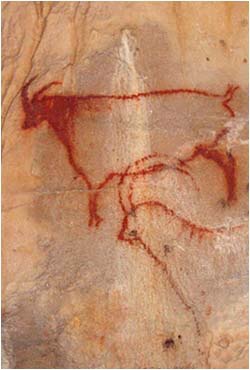 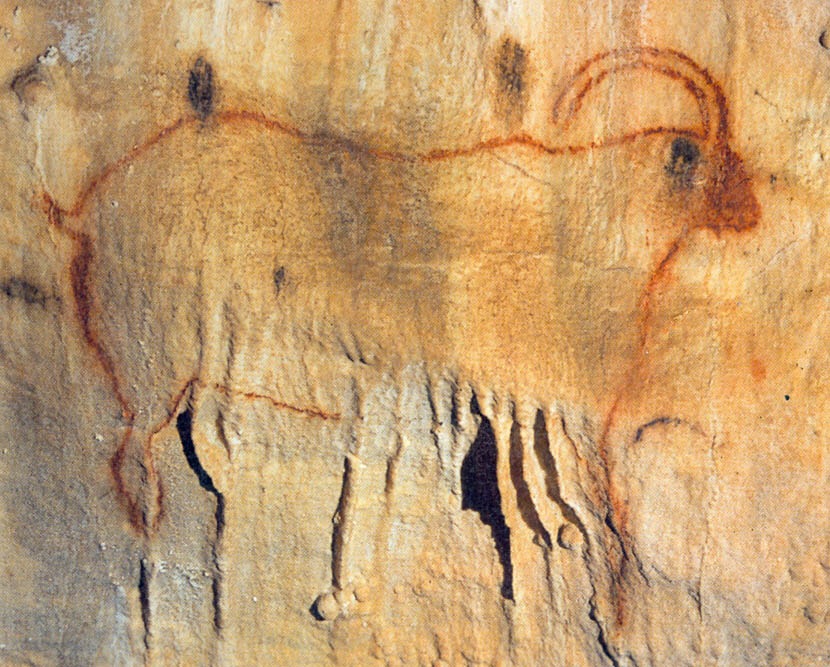 It was not possible to peek around the corner and see their subject either…there was no running outside to get a look at what they were painting.  The sites where they painted were often circuitous,treacherous  routes which were only reached by winding your way through stalagmites and stalactite  riddled passages and multiple tunnels, often about half a football field underground.  That seems to rule out the idea of a carcass being nearby for reference.  These images were done from memory.  Impressive! 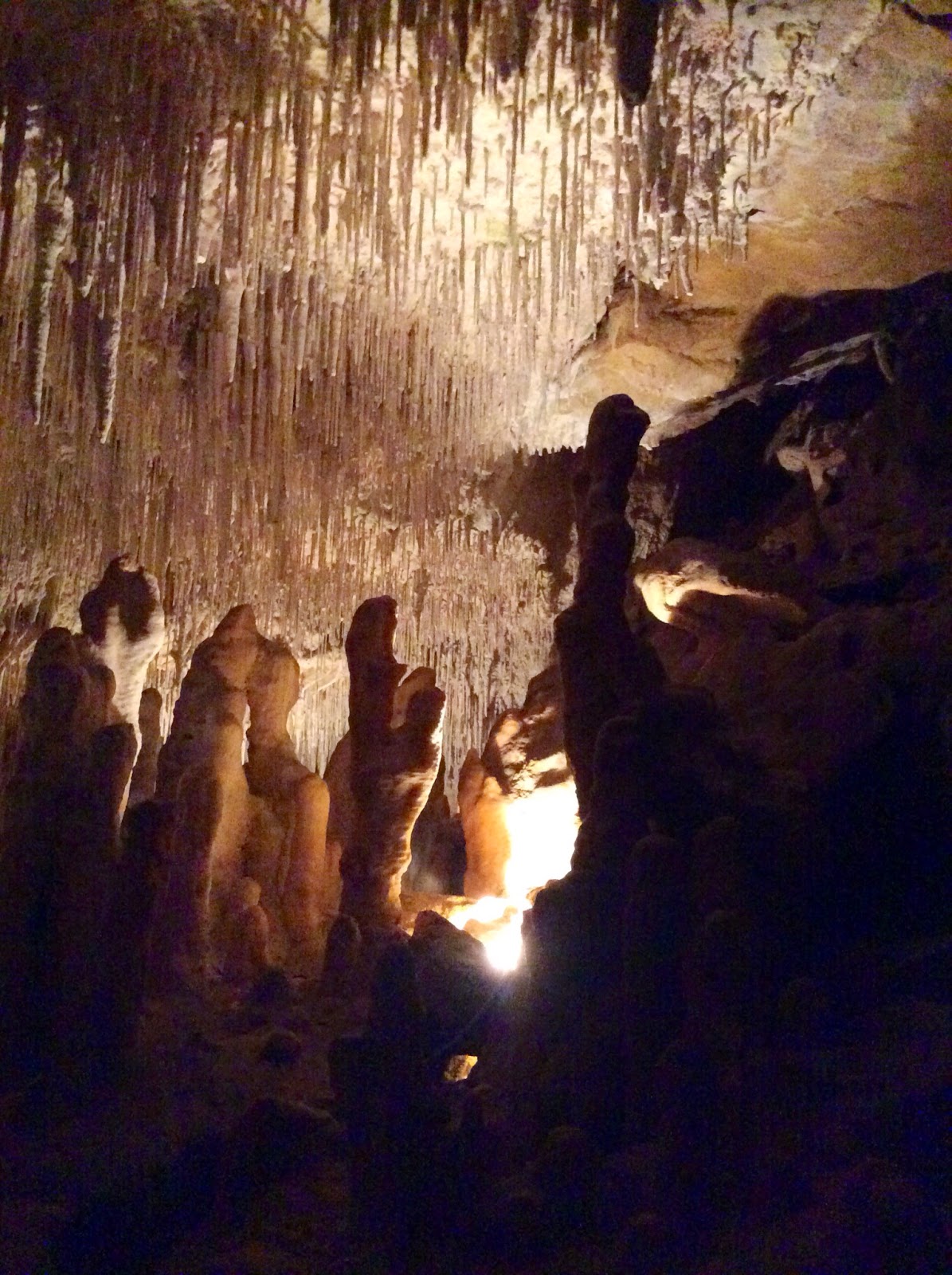 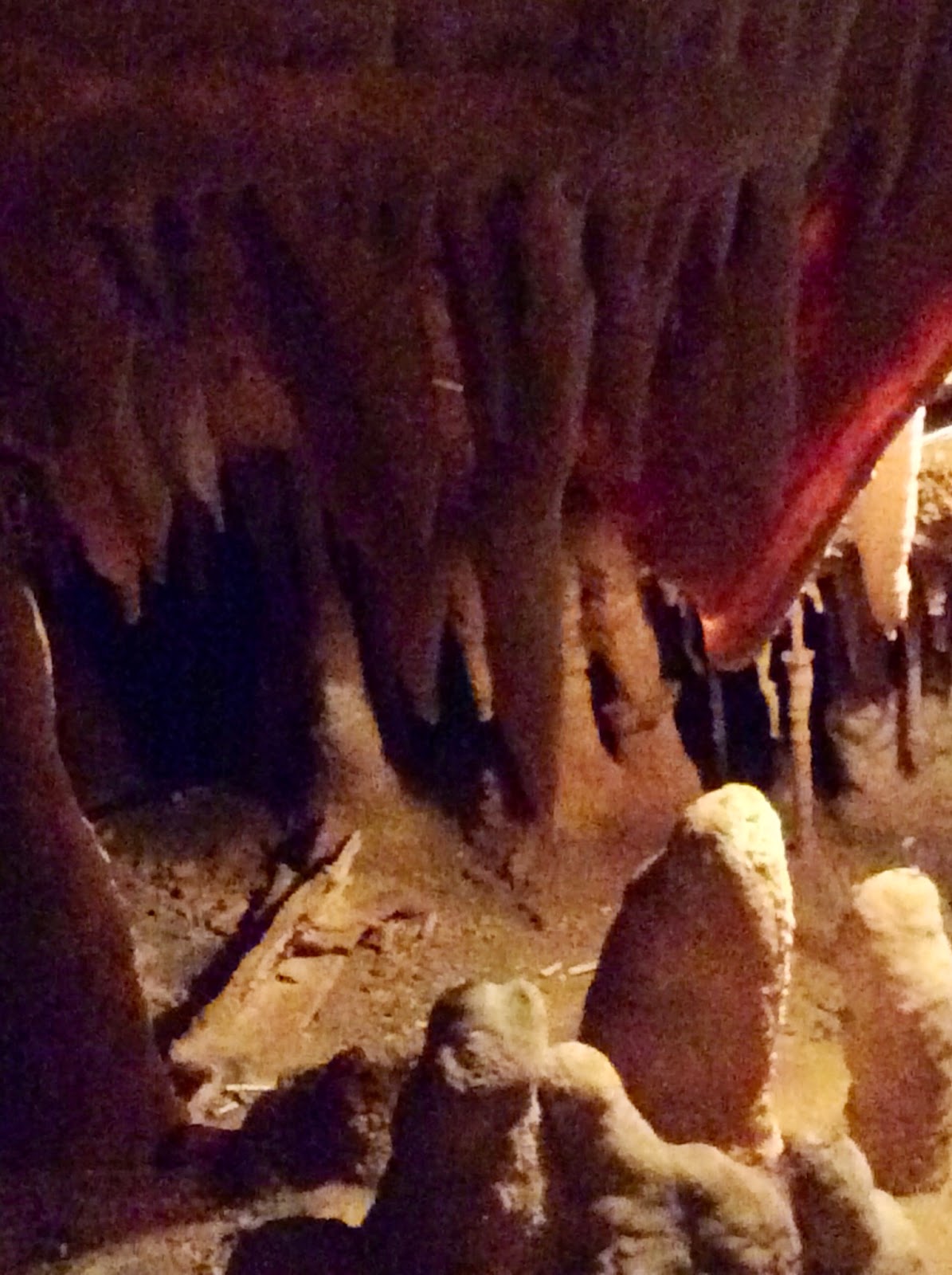 Each painting must have been executed by the light of a small hand held oil lamp made out of rock.  I kept thinking…what if they ran out of oil?  How would they ever find their way out?  No one would ever hear you if you called for help.  The pathway was treacherous, filled with stalagmites and stalactites.  The path was also winding and a long distance from the surface in order to get to the chambers where they painted. No rope would be long enough to mark the trail.  Cave bears inhabited the caves, so if you got past them and didn’t break your neck on the way, you had better be sure you didn’t run out of oil!  Finding your way out would have taken more than a trail of bread crumbs!  Yikes!

The caves are in danger of contamination from visitors.  Our breath and the contamination from our fingers introduce changes which threaten the environment of the caves.The real Lescaux caves have been closed to visitors, and all you can see now is an exacting replica.  I’ve heard it’s wonderful, but seeing the real thing at Cougnac and Pechmerle may be something future generations may not be able to do.

That’s why I say, “GO!”, and “GO SOON!”  Enjoy these photos, but understand that they DO NOT do the real experience any justice. The environment is mystical and imparts a sense of the supernatural to these ancient works of art.  I found myself wondering if Gaudi may have visited these caves and been inspired to create his drippy style of architecture found in the Sagrada Familia cathedral in Barcelona…What do you think??

We could not take photos of the art while in the caves, but we could photograph the rock formations.  My photos of the rocks were done while I was underground, but my only record from the cave paintings are the quick sketches I did while in their presence.   Thankfully, the internet allows me to share these photos of the actual cave paintings here.  I used my sketches of the images while in the caves in order to do a painting which was inspired by all that I saw.   A photo of that painting is below.   I can’t wait to introduce this subject to my students as an interesting and playful lesson for us to paint together in the studio when I get back home…
Let me hear from you! I look forward to your comments.

Art Lessons in all media


Feel free to share any of this blog post on your own blog or website, but I ask that you you include:
Rebecca Zdybel is an artist and instructor in Myrtle Beach, SC.  Follow her and see her work at http://www.artmyrtlebeach.com/