By Rebecca ZdybelSeptember 24, 2014Uncategorized
Rome is magnificent and the buildings and architecture are incredible.  Both the scale and number of gorgeously intact buildings and ancient ruins boggles the mind.  They are everywhere!  Go around any corner, and you stumble on yet another architectural beauty. Of course, the most notable of these architectural wonders is the Colosseum.  We went on a tour today and found out a few fun facts… 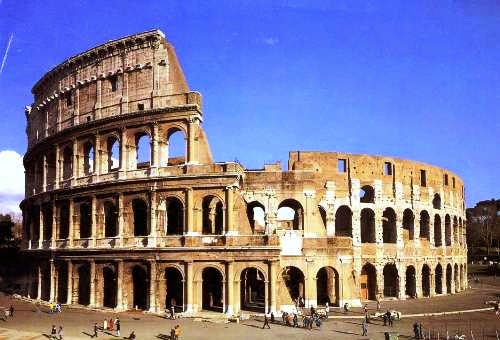 Fact:  The Colosseum was not always called the Colosseum.  It’s original name was the ‘Flavian Amphitheater’.  The Colosseum derived it’s current name from being adjacent to the “Colossus”- a huge bronze statue of Nero that has since been melted down and destroyed.  This is what it may have looked like: 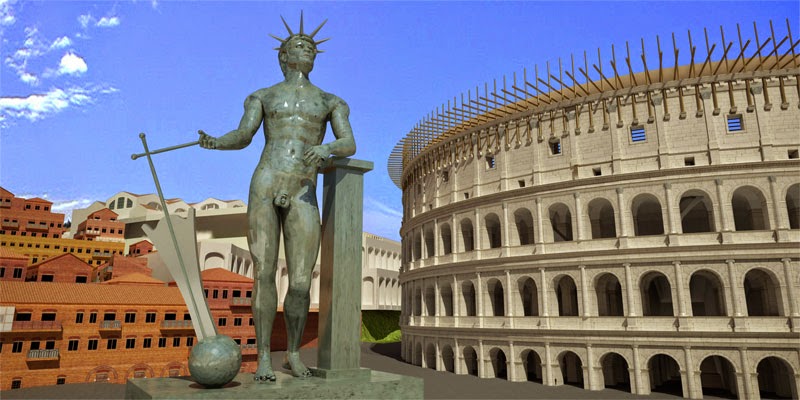 Did you know that the Colosseum had assigned seating and gates like a modern stadium? There was also fabric sheltering the spectators from above, supported by beams which protected all but the center of the Arena.  Sailors used drums to work together and haul the sailcloth into place. 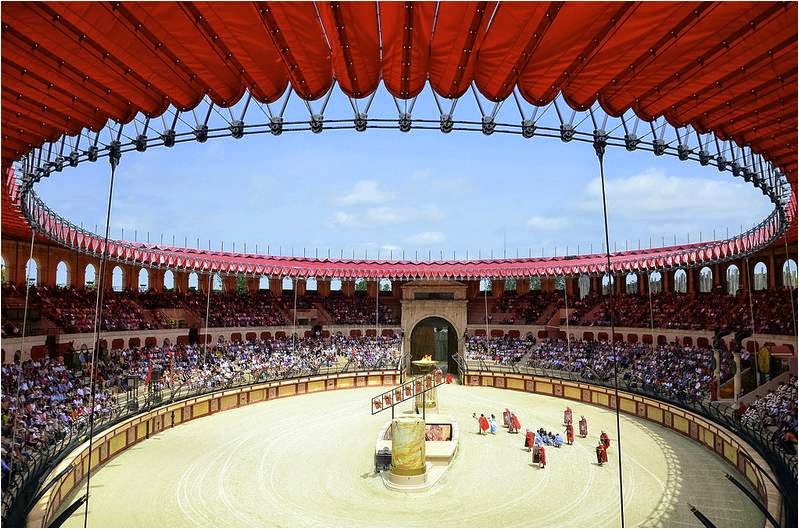 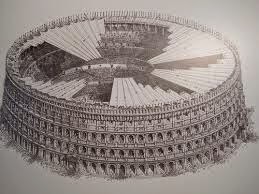 Fact:  “Arena” means “sand” and that very substance covered the floor of the Colosseum.  Sand acted as an absorbent surface for all the blood and gore which took place upon the arena floor and gave better footing to the combatants. 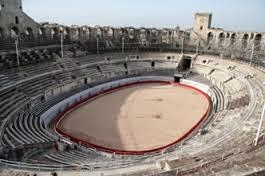 Sand also disguised about 60 trap doors which served as “stage entrances” for actors in the various dramatic battles and events.  Animals and people would make their entrance onto the floor of the arena using elevators raised by slave-powered winches.  A diagram is pictured below. 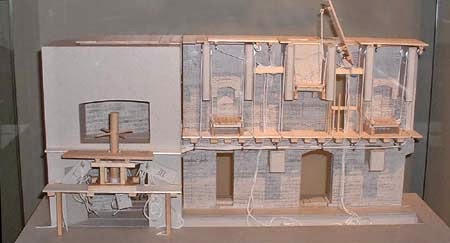 Did you know that Jewish Slaves built the Colosseum?  Rome destroyed the Jewish Temple and defeated the Jews in 70AD and then brought back 50,000 Jewish slaves and plunder from the Temple in order to construct the Colosseum?  It was begun in 72 AD finished in 8 years.  This Triumphal Arch of Titus commemorates the Roman victory and shows the plunder of Jerusalem being brought back to Rome by the slaves and soldiers. 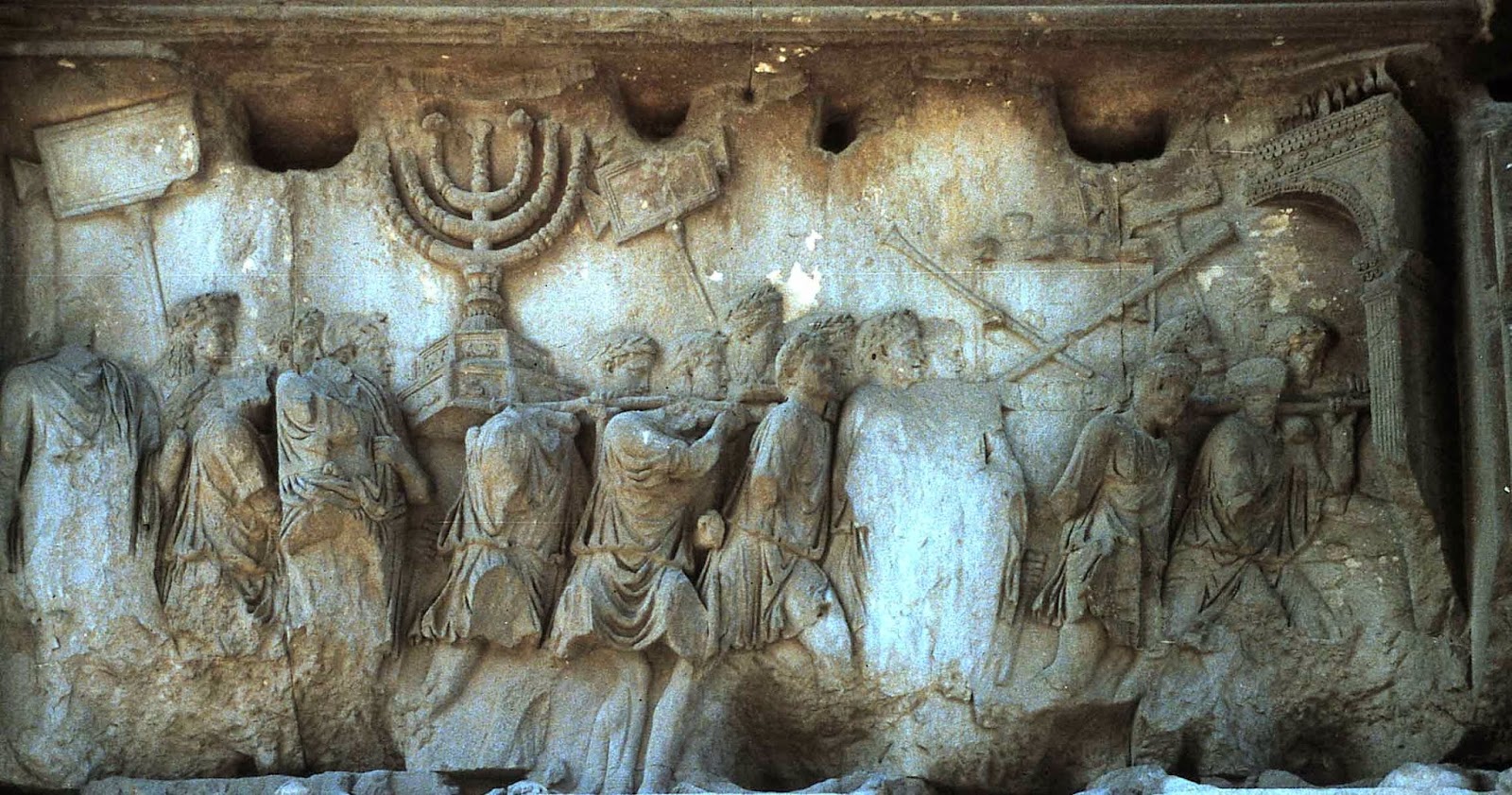 Did you know that most gladiatorial battles were man to man?  They did not always end in death, and there was quite a bit of incentive not to kill them, since their training and skill was very expensive to cultivate.  They trained just across the street in a private arena which was connected to the Colosseum by underground tunnel.  During games at the Colosseum, the gladiators generally fought in the afternoons, animals fought in the mornings, and executions took place around the noon hour.  A couple of tour guides maintain that it is unlikely that Christians were ever tortured there…but I haven’t checked that fact out for historical truth. I know the Pope makes a pilgrimage there as a holy site every Lent, and I doubt he would do that because animals were killed there.
Fact:  The exterior of the Colosseum is made of white Travertine?  It’s a local stone which was very durable and easily available. Though it’s original color was white, and it has only become the terra-cotta color we associate with it due to weather and age.  Can you imagine?  It’s currently undergoing a 60 million Euro restoration, thanks to donations by a wealthy Italian businessman who owns Tods shoe company.  Its already partially restored to its original color.
The Colosseum was decorated with painted statues and may have looked something like this in it’s heyday (except it would have been white, right?).  Other amphitheaters were in operation throughout the empire, but in Rome, the Colosseum continued to function as a major center for these Roman games for around 500 years. 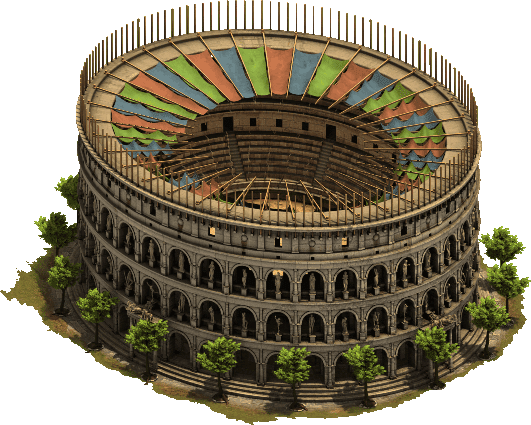 Fact:  The Grand Opening Games of the Colosseum involved 100 days of games and overall they were responsible for the slaughter of over 10,000 animals?   Any small animals which were left, were often given to the people.  Every kind of animal was included in the games, because the goal was to thrill and entertain.  The Roman people did not have zoos or the ability to travel with ease, so bringing exotic animals out for display provided that shock and awe experience which the Emperors wished to provide.  Animals included everything from Tigers, lions, Elephants and Bulls, to Crocodiles, snakes, and small animals.    So many lions were killed during the games of the Roman Empire, that some believe these types of spectacles contributed to the eventual extinction of the European Lion.
Were you surprised by any of these facts? We were fascinated.  If you’re wondering which tour of Rome to take:  Our City Wonders tour was great, but 4 hours of climbing and walking on the rough stone surfaces of the Colosseum, the Roman Forum, and the Palatine Hill were quite demanding in the heat.  If you go, be sure to drink water, dress for the weather and wear good walking shoes!

Let me hear from you! I read every comment and it means a lot to know you are out there traveling along with me.


Feel free to share any of this blog post on your own blog or website, but I ask that you you include:
Rebecca Zdybel is an artist and instructor in Myrtle Beach, SC.  Follow her and see her work at http://www.artmyrtlebeach.com/